I want to be an artist, but I’m so afraid of doing it wrong… as if art has “right” and “wrong” like other things do! It’s hard for me to comprehend that, though. My art teachers in elementary school and middle school would always say that there are no mistakes, because you can turn “mistakes” into other things. In my head it makes sense, but I’m a perfectionist (Aries) and always feel like I’m just not good enough to do art.

I’m trying to get over that.

One of the best picture books I’ve ever read is helping me with this. It’s called Ish, written and illustrated by Peter H. Reynolds. A boy named Ramon likes to draw, until his older brother says his drawing of a vase doesn’t look anything like a vase. Distraught, Ramon crumples every picture he draws the next day because they aren’t good enough, and he throws them away. He notices his sister taking a crumpled page out of the trash and running away, and follows her to her bedroom, with uncrumpled drawings hanging on her walls. Her favorite is the vase, which he says doesn’t look like a vase and she says it looks “vase-ish.” What a freeing idea! He starts to draw eagerly, things that are tree-ish and house-ish… and the book teaches kids that imperfection is freeing.

If I ever get a tattoo, it’s going to be the title, as drawn on the cover, on my lower arm or something, where I can always see it when I’m getting creative with paint or writing or whatever.

So today I decided to just do it. I got out my paint and brushes, and I painted two canvases. And if that’s all I do today, two solid-color backgrounds, then that’s okay. It’s a start.

I decided to use the blue one for a painting. I’m taking my time with this, letting the paint dry before starting with another color. The final result will be a mermaid, but I’m having trouble envisioning what she will look like, afraid of doing it “wrong” so I’ve only done the background and her tail so far. She is not a skinny minnie, but a voluptuous mermaid goddess with a big pink tail. I love what I’ve done so far, which is actually bad because it makes the fear grow that I’m going to “ruin” it when I try to make her face and torso. I know it would be best to power through, but part of me is whispering to take the easy way out and do some fish next instead of diving in (pun intended) and painting the rest of the mermaid. I am thinking of using a red or purple color to add some scales, but I’m afraid of messing that up too. Need to do a Releasing Fears meditation before I get back to work. Meanwhile, he’s the progression so far:

This is the canvas after I painted a solid blue background.

This is after I added more blues and greens to make it look like an underwater world. I was doubting myself, but the more I look at it the more I love it. 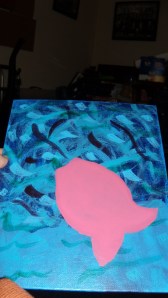 After adding the mermaid’s tail, I love the background even more. I am excited, but that stupid boulder of Perfectionism keeps standing in my way.

My Wise Woman Goddess Self told me (in the Creative Goddess meditation, week 1) that I am already the artist I am meant to be. I have to keep using that affirmation and reminding myself that I’m perfect just as I am.

One thought on “Work in progress: Mermaid painting”