If you haven’t seen it, check out my list of 100 Things to Do in 2016. Previously posted: updates 1 and 2. It’s been a while since I’ve done some of these Things, so I will do my best with these notes. In the future I should just start a draft and comment as I go.

14/100 – Thing 10 – Read an autobiography not written for children, completed 2/4/16
I read Sounds Like Me: My Life (So Far) In Music by Sara Bareilles. I think I got this via NetGalley within a month or two before it was officially released, but hadn’t read it yet. I really like Sara’s music, and I enjoyed her autobiography immensely. The chapters are titled with songs that she wrote and/or released at the time the events in the chapter took place, so I made a playlist with those songs and listened to each before reading the chapter. It’s a great playlist itself, with some of her hit songs but also quite a few that were new to me. Highly recommended.

15/100 – Thing 42 – Create my own ice cream flavor, 2/7/16
I started with frozen raspberries and additions include chocolate syrup and white chocolate chips and crushed candy cane. I only had milk so the consistency was terrible, but the taste was pretty good. Next time I want to try using heavy cream and see if it ends up more like ice cream.

16/100 – Thing 69 – Try a new recipe, 2/16/16
I made a delicious Irish Chocolate Mint Dessert, which is almost identical to my mom’s famous Fudge Mint Petit Fours that she makes around the holidays but with mint extract and green food color instead of creme de menthe. The recipe is from a mail-order subscription I used to have called Easy to Bake, Easy to Make. YUMMY! It’s a chocolate cake-y layer, then a layers of what is essentially a green minty buttercream, and then a layer of chocolate chips melted with butter that hardens. 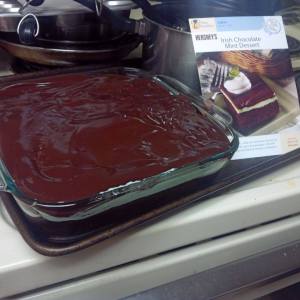 18/100 – Thing 47 – Try to write a song, 2/24/16
Okay, so this was actually not as hard as I anticipated because (1) I decided to go with a REALLY short song instead of a full-length one, and (2) I found two websites that made it really easy! I created the music on Hookpad. I couldn’t export or download anything, so then I found another site, flat.io, where I could copy everything to, and then download my song as sheet music and as an mp3. The lyrics are: “Writing a song is hard. / I don’t know why… / I have written a song!” I wasn’t thinking of not posting it, but what the heck, I’m sharing everything else here. Here’s my “masterpiece” — don’t judge me. It’s pretty terrible.

Things I am working on: